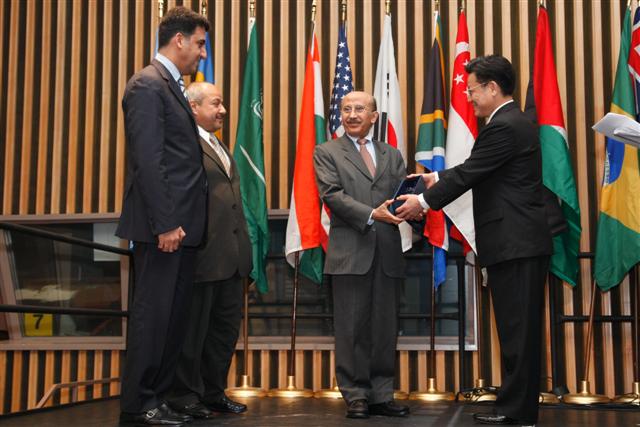 In a press conference organized for this occasion attended by Abdulmalik Al Sheikh, Executive Director of Sadad and Dr. Riyad Moussa, the permanent representative of the United Nations in the Kingdom of Saudi Arabia, Al Sheikh expressed his pride of the UN's selection of Sadad as a winning entry which was officially launched during mid last year.  Since then, this system has changed the public and private sector electronic payments in the Kingdom by successfully transforming more than 82% to electronic transactions through various banking channels which includes internet based banking services, automated teller machines, phone banking, and point of sale outlets which have been launched recently.  Sadad successfully linked 41 public and private sectors representing various sectors which include ministries, associations, municipalities, general services, telecommunications, insurance, airlines, media, installment, financial services, and universities.  Work is underway to link other sectors where the total number of organizations to be linked will reach 60 by end of this year.  Al Sheikh noted that Sadad has treated more than 31 million transactions during the first half of this year at a value exceeding SR 14 billion.
From his end Dr. Moussa mentioned that the United Nations Public Service Awards aim at raising the level of services provided to individuals in the public and private sectors and incentivizing services providers to reinforce professionals, support innovation, and improve the provision of general services throughout the world.  In addition to that, the awards aim at studying innovations and successful
experiences in general management and how to make use of it to benefit other nationals.  He added that Sadad was among 12 recipients to receive this award from a total of 180 initiatives from 40 countries this year.  These awards are categorized based on five geographic locations and divided into three key categories:
1. Best Category for Improving Transparency, responsibility, and responsiveness in the public sector awarded to Rwanda, Singapore, United States, and Brazil
2. Best Category for Improvement of Service Provision awarded to South Africa, Australia, Sweden, Saudi Arabia (Sadad Payment System – SAMA)
3. Best Category for Reinforcing Participation in Policy Making through Innovative Methods awarded to Tunisia, India, Spain, and Jordan